Tips for working with a book cover designer

I learned an interesting lesson today from Terra Harmony at http://twainwannabe.blogspot.com. Basically, Terra knew exactly what she wanted from a book cover, and told her cover designer what to do… the end result was awful; so she found another book cover designer and tried to start over with the same idea – but the new designer said “no.”

The second cover is a product of the artist’s imagination.  I gave her all the same instructions I gave the first artist, and she plain out said, “No.” Well look at the big balls on this chick.  I tried again, giving her the simple instruction of, “Water.  Fantasy.  Go.”  And….voila. 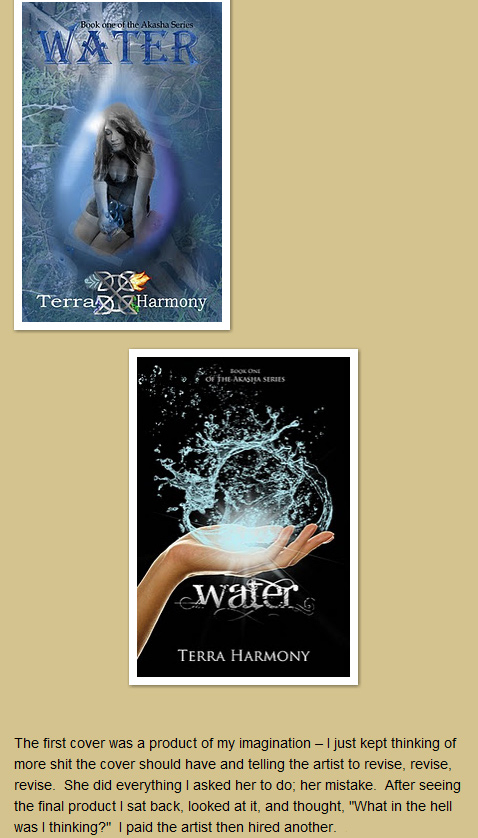 The first cover doesn’t work – I’m not sure who the cover designer is, but I don’t blame them entirely for the result. Although I really don’t like the choice of font, if I needed to follow the same directions (central figure inside drop of water?) I may not have been able to. The second cover design is by Keary Taylor (author of the FALL OF ANGELS trilogy, and maker of some excellent covers – this being one of my favorites).

The issue at hand is complex: in general, the more specific the author’s instructions, the less likely it will be able to be done well. This is both because A) simple covers almost always outperform and B) each cover designer has their own style and skillset – they know what they’re good at and what they can make look good. If you chose a designer based on their samples, let them come up with what works.

That being said – I usually prefer to be given some direction and ideas, rather than “surprise me!”. When authors give me extremely vague directions like “it should look like a best seller” or “it should be magical/professional” I have no idea of what they really want/like. So, although I may make a very decent cover, it wasn’t what they had in mind.

The moral of the story

Have some ideas in mind, but be flexible. Nearly all of my finished covers started out as something very different. Sometimes we abandon what we’re trying to do and go in another direction.

Also, don’t settle for a “just OK” cover. There are plenty of amazing book cover designers working for peanuts. Just about every indie author should be able to afford a kick-ass cover. (If you can’t, mow some lawns or deliver papers for a month).

Finally, don’t assume you know what’s best for your book cover. Give the designer some space, and if possible get some early drafts of the cover out to your fanbase/facebook friends/network/blog and get some real reactions.

How to design a YA dark fantasy book cover: best book cover inspiration and tutorial