We started with this rough sketch: 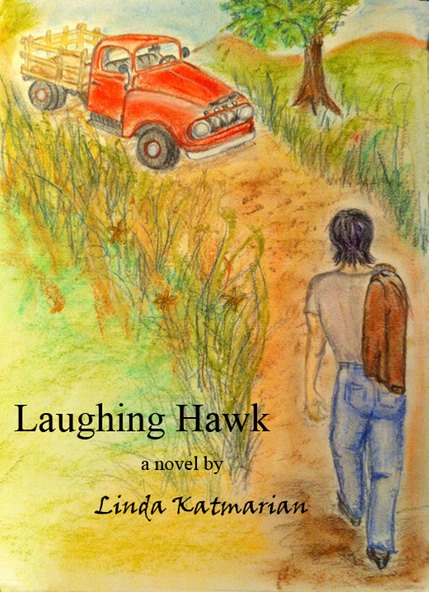 And got this: red truck, woods, handsome hunk – this could have been a strong cover. 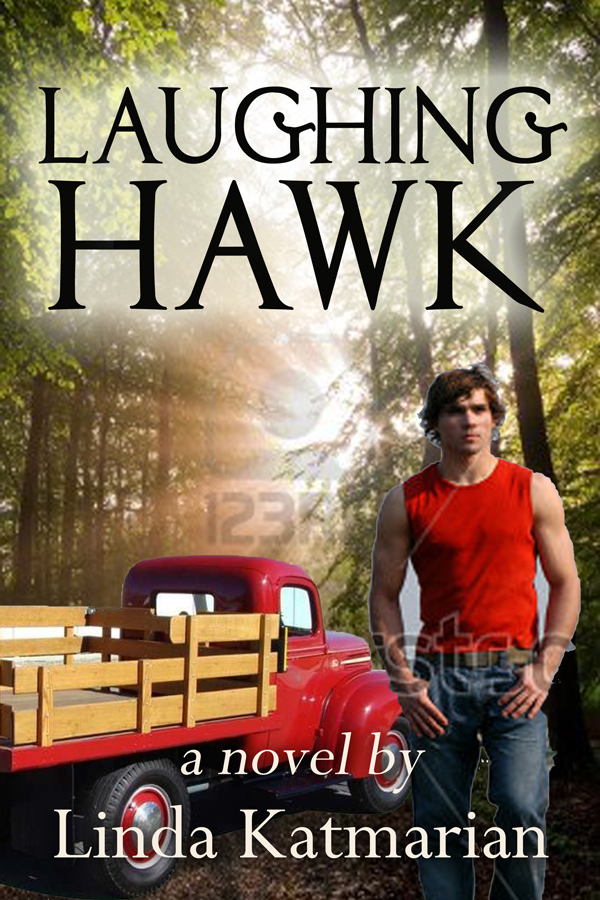 But then we wanted to expore some road trip + dreamcatcher images…. 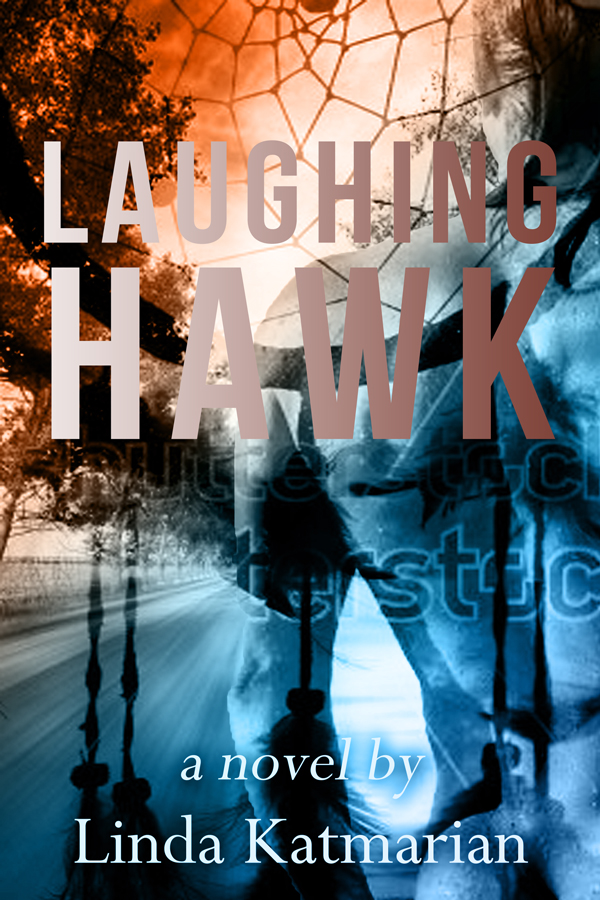 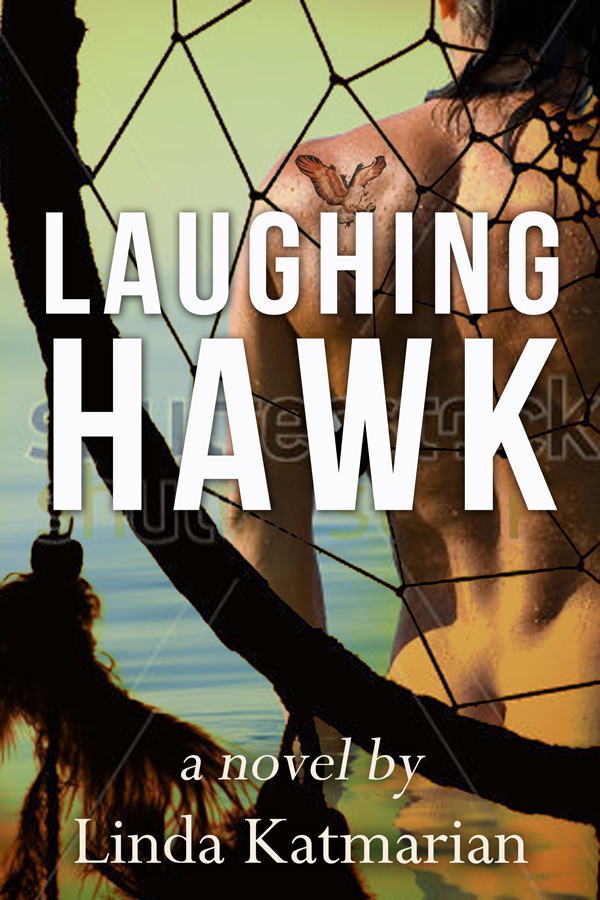 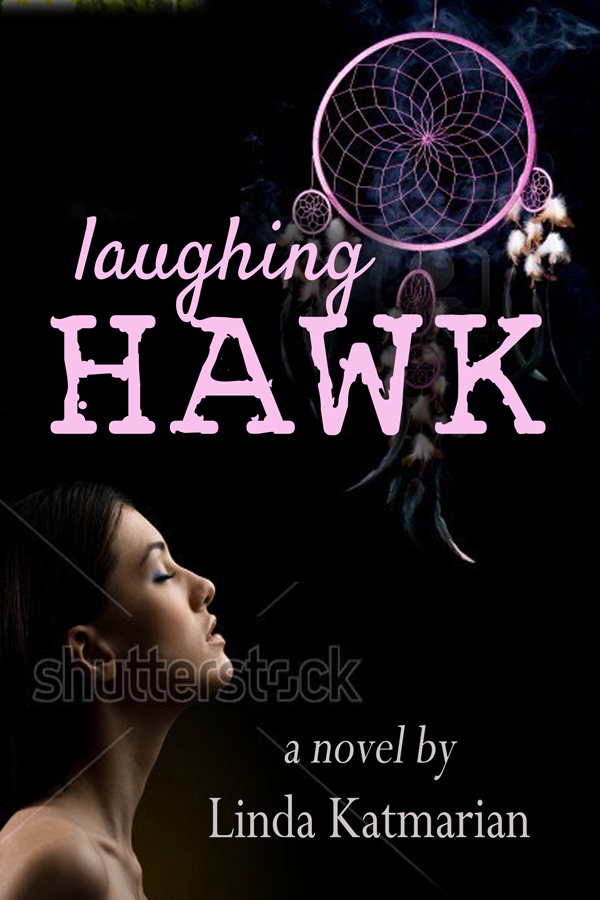 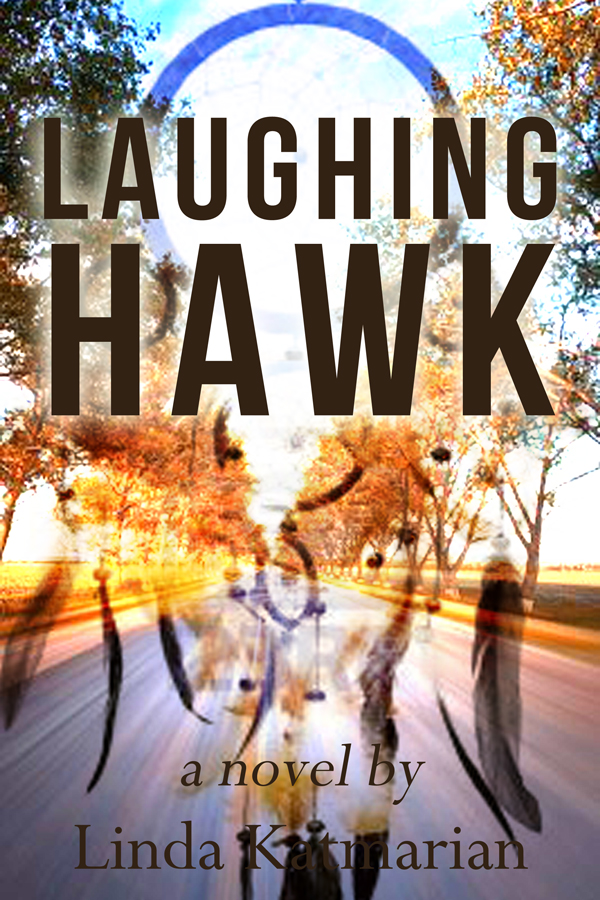 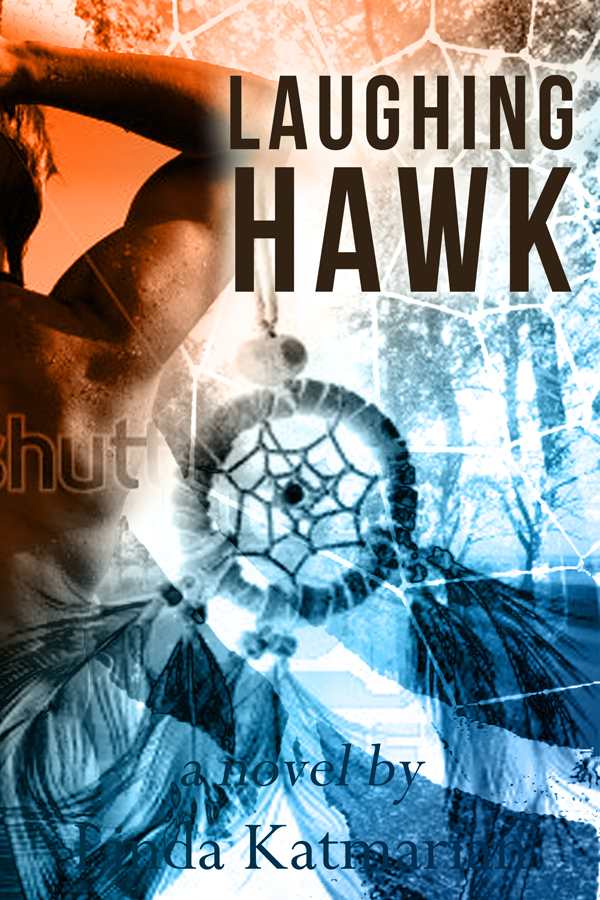 Still brainstorming but getting closer.

In 1964 Elizabeth Leigh is looking forward to college, escape from her unhappy home, and the fulfillment of her dreams. Adventure. Love. Her place in life. On a restless afternoon, she leaves school early and discovers her mother is packing to run off with a lover, abandoning Elizabeth and her stepfather. Worse, she learns her mother has squandered the college money her grandfather left her.

A fortuitous invitation from her cousin Melina to come to Los Angeles rescues her from an uncertain future. In Los Angeles, Elizabeth finds security in the embrace of her aunt’s family and is introduced to the man who soon becomes her fiancé, Collin Greenslade, an ambitious, up-and-coming real estate developer. Life could not be more perfect.

But Elizabeth looks at life through the eyes of an artist anad a dreamer. When her cousin’s boy friend, a civil rights activist, has his Thunderbird vandalized in Mississippi, he enlists his roommate, Mark Laughing Hawk, to tow his car back home. To Melina, this is an opportunity for a fun romp across the country and she insists that she and Elizabeth should come along for the ride. For Elizabeth, what starts as an adventure, becomes a journey of the soul. Dreaming of Laughing Hawk explores the universal human desire for love, power, and sense of purpose and the lengths we will go to attain them.

You can find out more about the book here: http://www.lindakatmarian.com

Extinction Point is a new novel by author Paul Jones: The central character (Emily) needs to ride her bike out of New York during a strange red rain:

Emily Baxter is a 30 something reporter living in Manhattan New York. Across the globe there are reports of a strange red rain seemingly falling from nowhere. At exactly midday the rain falls on New York from a clear blue sky. Eight hours later everything in New York (and across the globe) except for Emily is dead.

Within 24-hours Emily witnesses the dead within her apartment building transform into something totally alien. They turn into a strange eight-legged spider like creature that rushes about a lot and chews through walls in an effort to escape and join the millions of other transformed creatures that are running about New York.

Emily makes contact with a research outpost in a remote island off the northern most shore of Alaska. The scientists there tell her they believe the weirdness she is witnessing is affected by the cold and recommend she leaves New York and head to their location.

Emily, who does not know how to drive a car, must find supplies and escape the city on a bike while avoiding the ever changing planet around her as it transforms into something very alien. 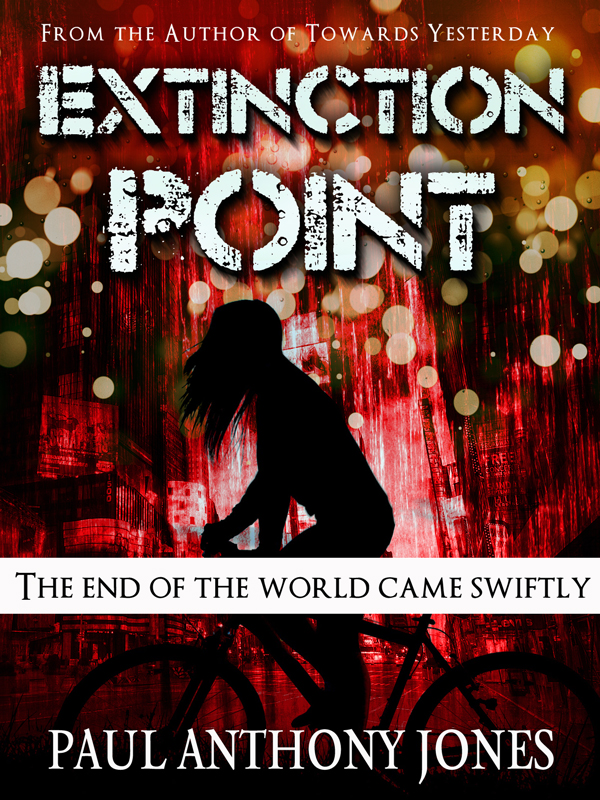 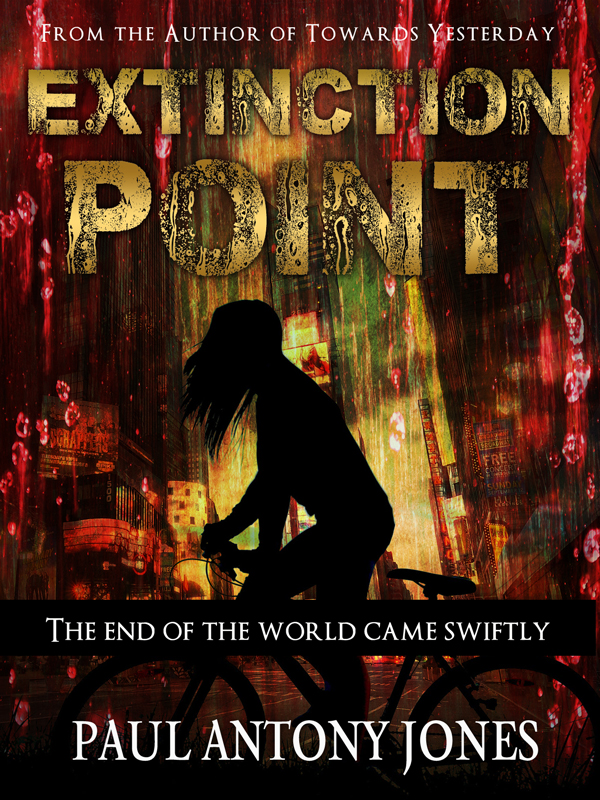 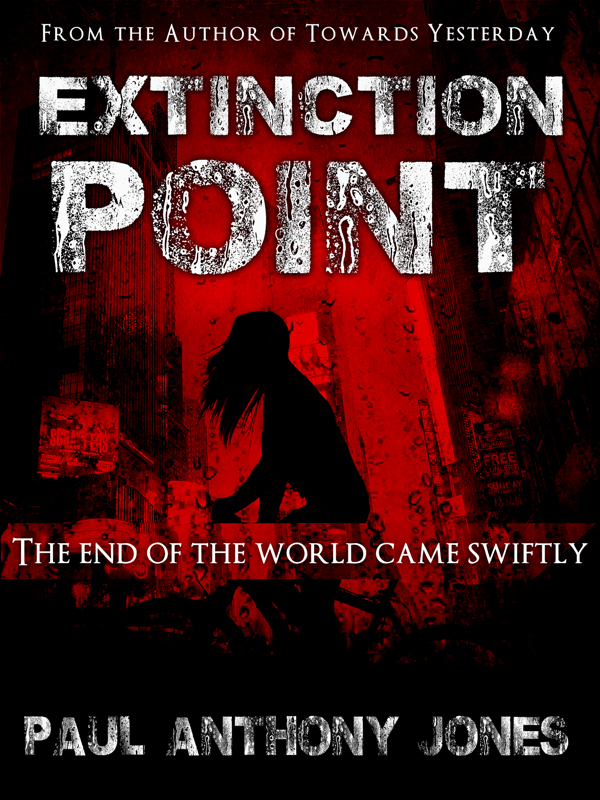 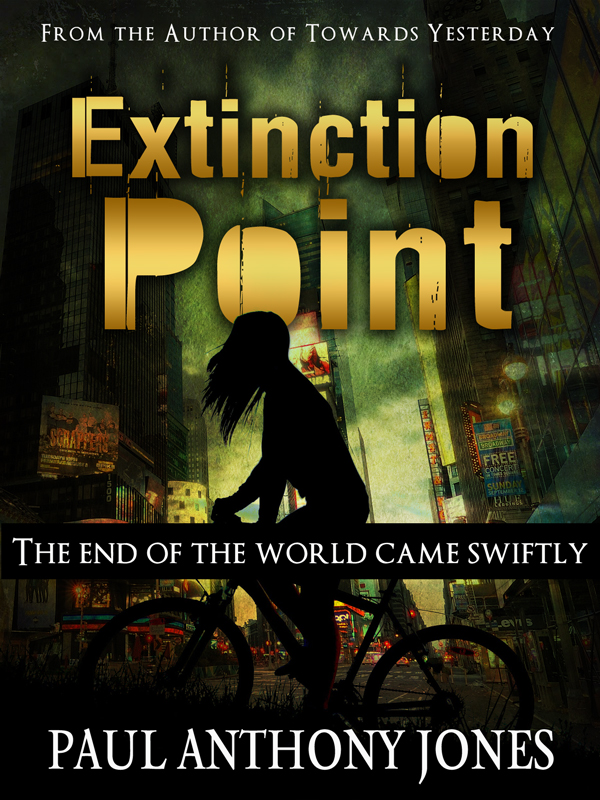 This cover came together beautifully, we’re all very happy with the result.

If you’re self publishing a novel or non-fiction book, you may get stuck on what to list as your publisher or imprint. Although this issue is largely avoided if you go the ebook-only route, when you’re preparing your full book cover for print with Lulu or Createspace, that little space on the bottom of your book spine, which usually features the publisher’s logo, may seem loudly empty. If you don’t want your book to look obviously self-published, you need to put something here. But what?

The truth is, it doesn’t really matter. Make up a company/publishing name, and a simple logo. You don’t really need to register it, or make up a fake publisher’s website, or anything like that. It’s just a quick cosmetic fix that makes your product look more professional. After you’ve picked a name, you can use that rather than ‘createspace’ or ‘lulu’ as the publishing imprint (you may need to pay a little extra to have this option; you should also try to get your ISBN listed with this information.)

How to make a publishing imprint logo

One of my clients sent me this photo and asked if it might work to make a logo. 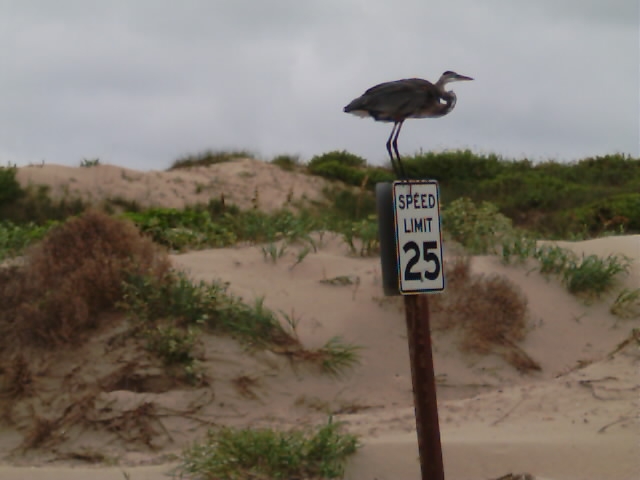 It took me about a minute to turn it into this:

Which I could then add into the print cover: 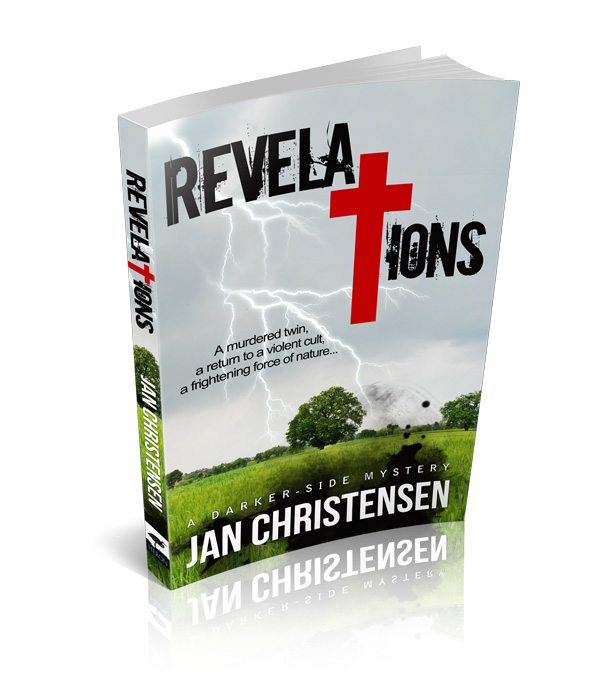 I don’t really like the white square on black; so I’ll probably invert the logo and make the text bolder:

It’s a small step; not necessarily the most important, but worth doing if you’re trying to do things right. If you need a logo design or publishing imprint made, contact me for details.

I’ve had the pleasure of remaking Ray Gorham post-apocalyptic thriller 77 Days in September, which is burning up the Kindle bestseller’s list. Ray started with a homemade cover featuring a blacked-out North America (to emphasize the fallout after an EMP detonation). 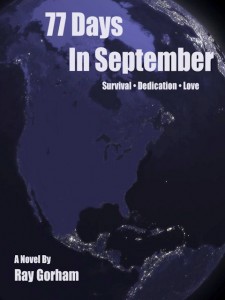 Now that sales are picking up he wanted to invest in something cleaner, but without making too big of changes, so I started out with these: 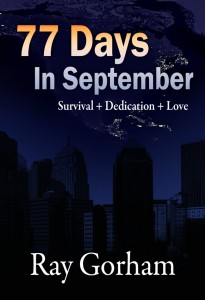 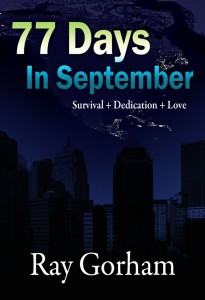 But I also suggested we try something stronger – I boosted up the city, changed the blacked out North America to a starry sky, added a dark country road (signifying the journey) and made the text orange and yellow. Then I threw in some nice fonts and text effects. 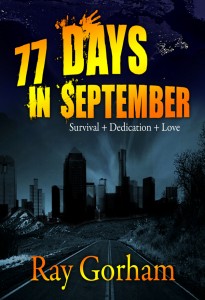 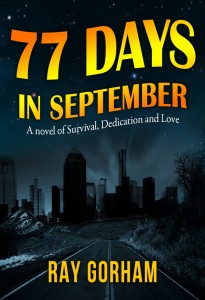 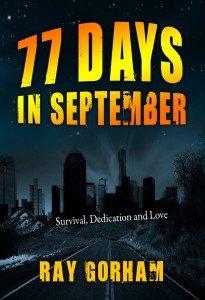 If you haven’t read it yet, go check it out! Here’s the overview:

On a Friday afternoon before Labor Day, Americans are getting ready for the holiday weekend, completely unaware of a long-planned terrorist plot about to be launched against the country. Kyle Tait is settling in for his flight home to Montana when a single nuclear bomb is detonated 300 miles above the heart of America. The blast, an Electro-Magnetic Pulse (EMP), destroys every electrical device in the country, and results in the crippling of the power grid, the shutting down of modern communications, and bringing to a halt most forms of transportation.

Kyle narrowly escapes when his airplane crashes on take-off, only to find himself stranded 2,000 miles from home in a country that has been forced, from a technological standpoint, back to the 19th Century. Confused, hurt, scared, and alone, Kyle must make his way across a hostile continent to a family he’s not even sure has survived the effects of the attack. As Kyle forges his way home, his frightened family faces their own struggles for survival in a community trying to halt its slow spiral into chaos and anarchy.

77 Days in September follows Kyle and his wife, Jennifer, as they are stretched past their breaking point, but find in their devotion to each other the strength to persevere.

and the final cover is… 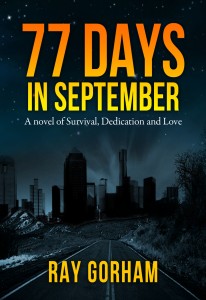 I’ve been working on a cover for “The Watchers” for awhile now – based on the plot outline, I tried to include the three main characters: Eli is an angel (watcher) who self-medicates with spider poison for powers,  Meridith is half-watcher and Alchemist, and Ava is a half demon violinist. (At least I think so – I haven’t read the book yet but look forward to doing so). But the first covers I did, focusing on the main characters and the school, are a little too shiny. 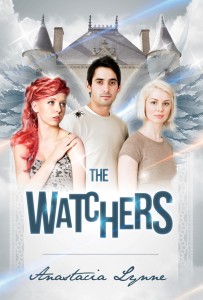 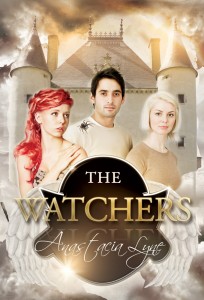 So then we tried to darken them and make them more bad-ass – but that was hard because the pictures are so light. We also wanted to add a city scene. 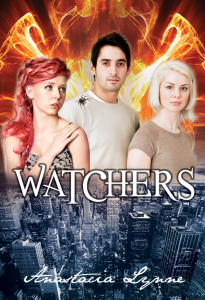 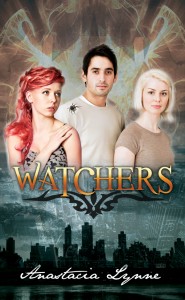 That wasn’t working too well either. So I ditched all that and started over, focusing on one strong central character. These turned out pretty good: 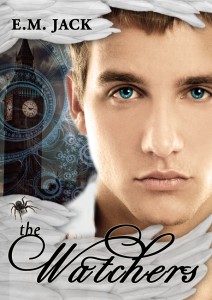 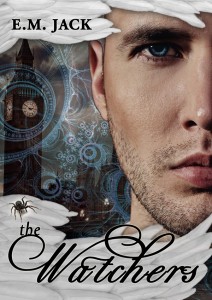 So we tightened it up a bit, went for a less scrolly-font, and voilà! The final cover works pretty well. The moral of the story: creating a book cover is not a static process. Sometimes the first idea isn’t the best idea. If you get stuck, change everything! If it’s pretty good but you don’t love it, take some time off, search through picture sites until something grabs you. 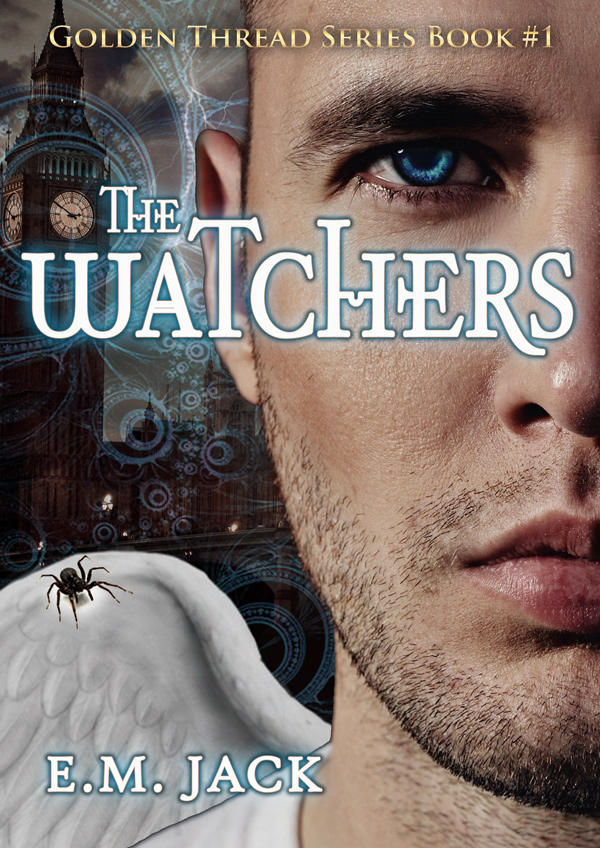 Recently I’ve been working on a cover for D’vorah Lanksy’s “Virtual Book Tours Made Easy”.

She’s an established author and the book is excellent, so she gave me a shot to make a very professional cover. As you can see in the development (some of these samples started as not very good, but got better) we came pretty close; in the end she decided to go in a different direction. If you’re an author looking to sell more books, you should definitely search for her books on amazon.