New book cover critique! Quintspinner is a pirate book. Originally published with iUniverse and the following cover, which I quite like: 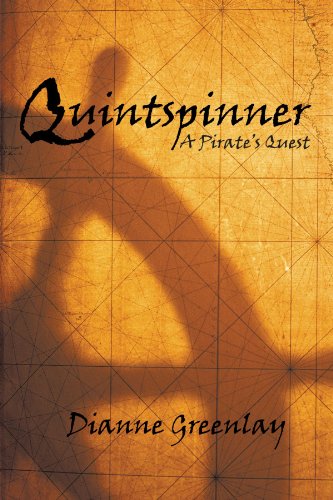 A little boring, but pleasant and not bad.

But the author migrated to Createspace and had to get a new cover (below, with the silhouette and the skull and crossbones). This cover is not terrible, but it isn’t doing a very good job of selling the book. (All I know so far is that it’s a pirate book – I can’t tell if the character is male or female, how old they are, if they are attractive, if they are confident, scared or tragic…. I don’t know if it’s romance or adventure, etc.) 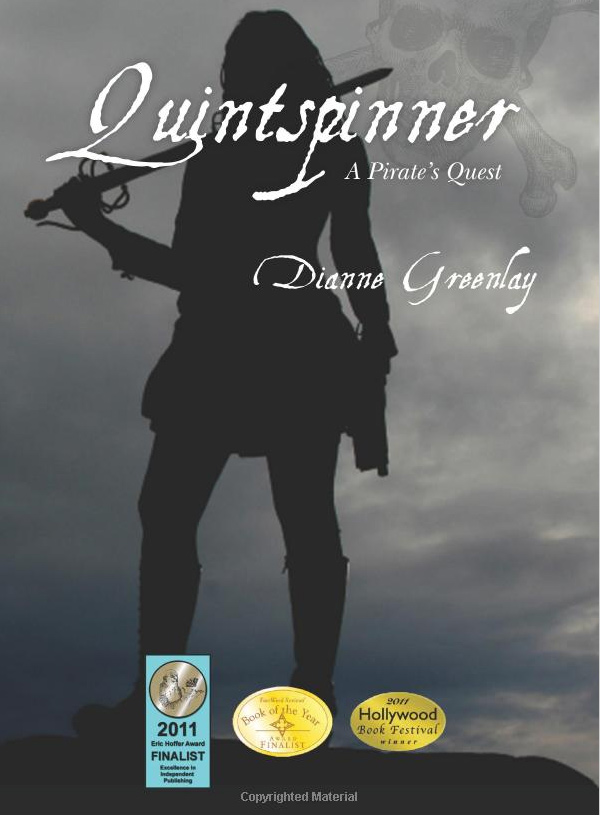 Mostly, it’s just drab. Here’s what I dislike/would do differently:

1) Lose the awards. This is probably an excellent book, it’s won over a dozen awards. But putting them on the cover isn’t helping sell – the awards are the brightest, most colorful part of the cover so that’s what you see first, but they are unattractive. You can’t read them from thumbnail size, they don’t grab attention – they just seem out of place. On a print book I would put these on the back. But for online sales, I’d just list some of the awards in the description. The cover is not about information, it’s about emotion – you have to get viewers to feel something immediately; not be persuaded by award stickers. (However, I probably would remake the most reputable award into an awesome looking shiny gold sticker, and put it on….it can help boost sales, but it has to look good and fit the design.)

2) More Color. I’ve got nothing against the sky taking up most of the cover space – if it were an amazing, awesome sunset. But this sky is boring.

3) Needs a face. Readers can’t like or care about a character they can’t see; it’s a nice pirate outline… it could work, but a face/body would work better.

4) Change the font. It’s very pirate-y; but not bold enough and a little unclear. It could work with a color gradient and more contrast… but white on gray, it already disappears. All the text should be much bigger and bolder.

5) Action! This is a picture of a pirate standing on a rock. What’s he/she doing, posing? I would put a pirate ship in a storm, fighting a monster, a battle… some kind of movement/danger.

At any rate, I think this is probably an excellent book being held back by a mediocre cover.

What is Paleo? Lose Weight and Get Healthy: Book Cover